As part of the London Bus Museum's programme of bringing heritage buses to the roads of London, our latest event sees heritage buses dating from the 1940s to 1970s running every 10 minutes alongside the normal daily service on route 175, Dagenham Kent Avenue to North Romford Chase Cross. In addition, limited journeys will operate on route 174 between Dagenham Kent Avenue and Harold Hill Gooshays Drive with certain journeys extended to Noak Hill Pentowan.

Bus owners wishing to participate should contact us here.

Check back regularly for updates. 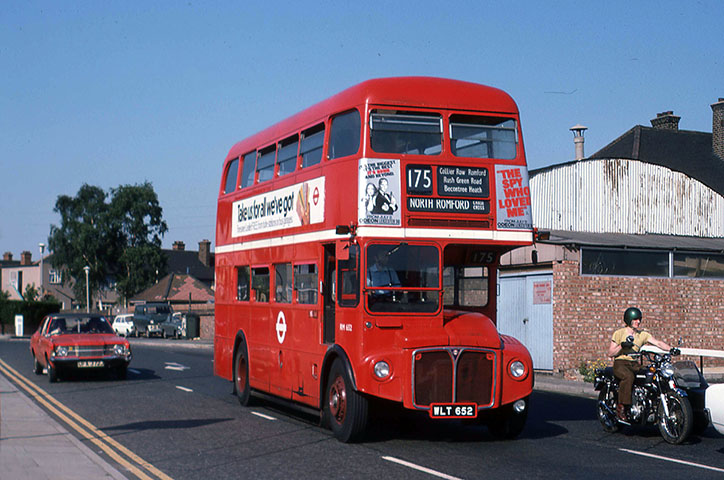 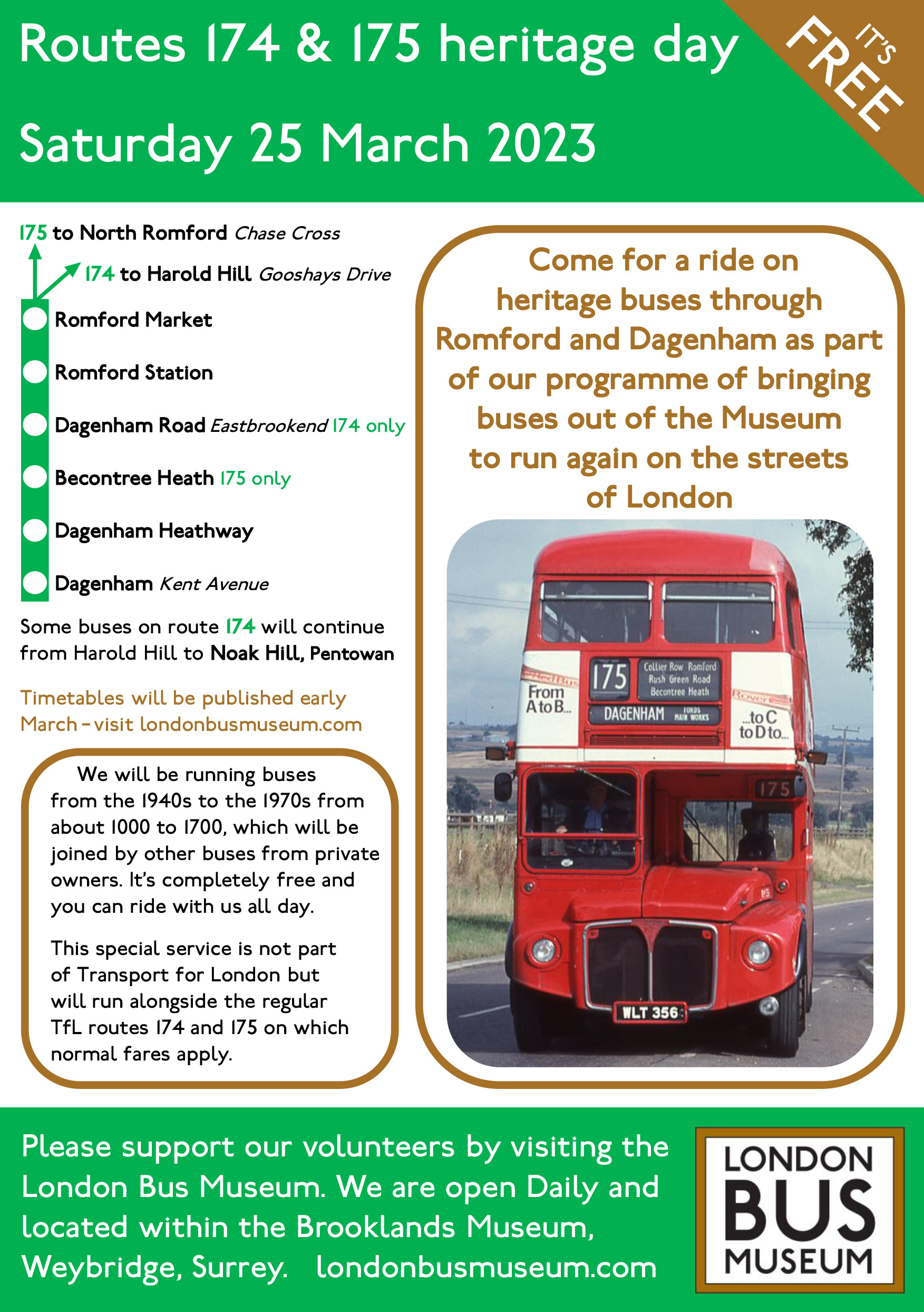 The Ford factory at Dagenham produced its first vehicle on 1 October 1931.  Shortly afterwards, a new bus service was introduced to serve the works, running along New Road and down Kent Avenue from Dagenham Chequers and numbered 224.  The level of service increased rapidly and on 6 July 1932, three new peak hour routes were added, including the 175 from Stapleford Abbotts via Collier Row, Romford and Becontree Heath.  In off-peak times, the 175 ran as far as Dagenham Chequers, at the southern end of Heathway.  Two in every three journeys reached no further north than North Romford Chase Cross.  The route was operated from Hornchurch garage (RD), using ST class double-deckers.

Between December 1939 and June 1973, the 175 was extended west from Dagenham Chequers, running initially to Manor Park, then from November 1940 to Poplar Blackwall Tunnel.  From 1942, journeys to Ford Works ran from both the Romford and Poplar directions.  To the north, a few journeys had been extended during the war to serve Chipping Ongar or Stapleford Tawney aerodrome, but it was not until November 1958 (after the disastrous bus strike that year) that the route was extended to Chipping Ongar in replacement for route 103.  As with the route to Stapleford Abbotts, the majority of journeys still terminated at North Romford Chase Cross.

The broadly 10 minute frequency continued from the 1930s to the 1950s, needing over 60 buses to provide the peak service in the mid-1950s.  From 1936, Hornchurch garage was joined in operating the route by Barking (BK), using LTs, and Upton Park (U), using LTs, then TD class Leyland Titans, then STLs, then back to LTs in wartime.  The petrol-engined STs from RD were replaced by diesel STLs at the start of the war, supplemented by LTs.  In 1945, all three garages received utility-bodied G class Guy Arabs, 50 of which replaced most of the scheduled allocation.

The Guys were only ever intended as a stopgap, and had short lives in London.  In 1951, the entire allocation was replaced by pre-war STLs, which had been in turn replaced by the new RT family elsewhere.  In the spring of 1952, the 62 STLs used on the route were all in turn replaced by RTs and their Leyland RTL cousins.  RD provided 27 RTLs, BK 12 RTLs and U 23 RTs.

To ease pressure on Hornchurch (RD), a new garage in North Street Romford (NS) opened in August 1953.  From February 1954, it provided 7 RTs in replacement of part of the U allocation.  Spring 1954 also saw a phased replacement of RD’s RTLs with RTs, but BK retained its RTLs until replacement with RTs in November 1958.  By 1970, the allocation had dwindled to 27 buses and the route was concentrated in U and NS garages, with U continuing only to June 1973.

In that month, the northern section of the route was renumbered 175A, running Chipping Ongar to Romford with one RT (converted to RM in 1974).  This route operated until 1977, when it was converted to a one-person-operated single-decker, the route being withdrawn in 1982.  Meanwhile, the 175, now running between North Romford Chase Cross and Dagenham Ford Works, retained its RTs (except on Sundays, from 1972 converted to one-person-operation with DMSs) until London Transport acquired from BEA a number of front-entrance Routemasters, previously used on the service to Heathrow along the M4.  In October 1975, a group of these were pressed into service on the 175, still in BEA orange livery and with no blind boxes, instead carrying panels in the front window ahead of the doors.  A few were repainted red during this period, but they were unpopular and the route reverted to RT operation during summer 1976; the BEA Routemasters became training buses and did not work in service again.

The end came for the RTs on the 175 on 19 March 1977, when 13 RMs were collected from round the fleet and sent to NS; even at that late stage, many of the RTs moved on for continuing service at other garages.  The RMs remained for five years before in turn being replaced by T class Leyland Titans during 1982, crew operated until April 1983.  Ts had replaced the DMSs on Sundays from November 1979.  Also in November 1979, the 175 had been extended to Hillrise Estate, up the hill from Chase Cross; for a brief period in 1981/2, the route had been extended (again) from there to Passingford Bridge via Stapleford Abbotts.

At the first tendering of the route by London Regional Transport in 1990, operation was retained by NS, by now operated by the East London division of London Buses.  East London was acquired by Stagecoach in 1994, who retained successive contracts until 2017.  During this period, Ts were replaced first by VN class Volvo Olympians and then from April 2001 by low-floor TAS class Dennis Tridents.  These were partly replaced under a new contract in 2012 by Enviro400s.  In December 2016, initially as a temporary measure, the route was withdrawn for Kent Avenue and Ford Works; it has not returned and Kent Avenue is now closed.

At the latest tender, Arriva London gained the contract to operate the 175 from October 2017.  Operation is from Arriva’s Barking garage (DX) using DW class Wrightbus DB300 Gemini 2's, then already about seven years old.  The route continues to operate every 10 minutes from North Romford to Dagenham Kent Avenue, along the same route introduced in 1932, with the exception of road changes and the diversion to serve Queen’s Hospital Romford in 2007.

The 174 by contrast is a post-war route, introduced in May 1950 to serve new roads east of Heathway and running between Romford Parkside Hotel (in North Street) and Dagenham Kent Avenue via Dagenham Road and Oxlow Lane, initially every 17 minutes.  After five months, the northern terminus was changed to Harold Hill Myrtle Road, running via Straight Road and replacing the 86B.  Operation was from Barking (BK) and Hornchurch (RD), like the 175 using Guys.

February 1952 saw an extension in Harold Hill to Gooshays Drive and conversion to STL operation.  In August 1953, operation transferred to North Street (NS), with a BK allocation (now RTL) on Saturday only.  After a phased transition, STLs were finally banished in favour of RTs from December 1953.

Noak Hill Pentowan Café had first been served by bus in 1926, by Romford District using 14-seat Chevrolets.  On acquisition of Romford District by London Transport in July 1934, the service from Romford was numbered G5 but was curtailed at Noak Hill Bear since the Traffic Commissioner would not permit standard ex-LGOC vehicles to make the difficult turn by the café at the Pentowan (even though these were only 20-seat DA class Darts).  This was the cause of much complaint and the service was restored in November 1934, by which time the route had been renumbered 252; this section was renumbered 238 in 1940 and ran until 1958.

Following the introduction of single morning and evening 174 journeys to Noak Hill Pentowan in January 1955, the 174 was extended in November 1955 via Whitchurch Road to Noak Hill Tees Drive with journeys to the Pentowan Café (the full route terminating here on withdrawal of the 238 in 1958).  At the same time, express journeys (carrying blue blinds) were introduced in the peaks and on Saturdays between Harold Hill Gooshays Drive and Romford Station (more information here).  The Saturday service ceased in 1957, but the weekday peak journeys survived much longer, finally finishing in 1977.

The 174 did not serve Ford’s Main Works, but in January 1958 was extended in the peaks from the Kent Avenue terminus via New Road and Thames Avenue to Ford’s Foundry.  On the other hand, the Pentowan journeys were reduced to hourly in the 1960s and ceased (apart from school journeys ) in 1974.  In a move that probably represented increased passenger numbers, the 174 was converted to RM operation 10 years before the 175, in July 1966, although Barking’s Saturday allocation remained RT until it ceased in 1970.

Routemasters ran the route for 16 years before being progressively replaced by Ts during 1982.  Like the 175, conversion to one-person-operation came in April 1983.  Perhaps reflecting a more commercial approach in the 1980s, Saturday express journeys again operated between 1986 and 1990.  Also as for the 175, the first tender in 1991 was won by East London from NS and the vehicles used have changed in line with the 175.  However, in an unusual occurrence, the Boxing Day service in 1994 and 1995 was operated by Capital Citybus, using Olympians from route 123.  Unlike the 175, the 174 has been retained throughout by Stagecoach East London, which since 2009 has operated from Rainham garage (RM).

Journeys to Ford’s Foundry ceased in 2002, but the following year, the route was extended via New Road and Marsh Way to Dagenham CEME.  The Centre for Engineering & Manufacturing Excellence is an education facility part-funded by Ford following the closure of the main part of their works.

Following another frequency increase in 2020 to every 6-7 minutes, the route now requires 23 buses.  25 new BYD ADL Enviro400EV City electrics were introduced to RM from the end of 2020 and the route was the area’s first electric bus route, closely followed by the 173 (which parallels 174 and 175 along Heathway), operated by identical buses from BK.