RML3 is one of four prototype Routemasters built and tested between 1954-1958 before full-scale production began. It was taken into stock in July 1957 and entered service in January 1958, allocated to Willesden garage for use on route 8 into and across central London. One of the two prototypes to have a Leyland engine, it became the only Routemaster to have a body built by Weymann of Weybridge/Addlestone in Surrey at their now long-gone factory just up the road from today’s Museum. 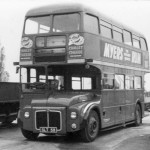 In January 1959 it was involved in a severe collision in the Edgware Road and suffered extensive frontal panel damage. After repair in London Transport’s experimental workshop at Chiswick Works, it was returned to service until November 1959 when its service career ended after only 18 months. It then became a driver-training vehicle in preparation for the introduction of production Routemasters to replace London’s electric trolleybus fleet. In 1961, the bus was re-classified as ‘RM3’ to allow the ‘RML’ designation to be used for the new longer Routemasters. 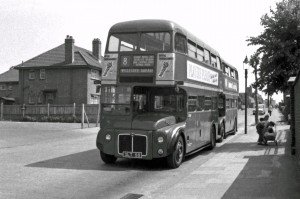 RML3 stands outside Willesden Garage in June 1959 before another journey on route 8. © Michael Wickham

After 1963, the vehicle became disused and saw parts removed to keep its fellow Leyland prototype (the Green Line version) roadworthy. In 1965, however, the bus was repaired and overhauled, losing its distinctive and unique design of bonnet, grille and nearside mudguard in the process and receiving a standard production version instead. In this form, it returned to training duties until April 1972. After a period of storage, it was acquired by the then Cobham Bus Museum in 1974, thus becoming the very first Routemaster to be privately preserved.

Thanks to a generous private donation and the skill of its volunteers, the Museum was able to re-create RML3’s unique, original front design during 2003/2004. None of the original parts had survived and there were no drawings of the original design, so all the parts had to be made from scratch, using some original screw holes as a guide together with photographs of the bus when new and others taken when the 1959 accident damage was being repaired.

The bus is one of the Museum’s longest residents and is maintained in fully-working condition.