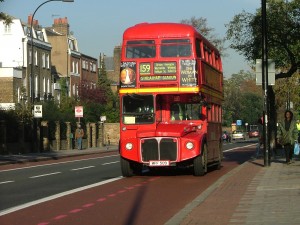 To mark the anniversary, the London Bus Museum is organising a free heritage operation on route 159 on 9 December.  The service will feature one of London’s first accessible double-deckers, Stagecoach TA1, now looked after by the London Bus Museum.  It will also feature a fleet of Routemasters and RT family buses, provided by a range of operators, recalling the mix on the ‘last Routemaster days’. Unfortunately, RM & RT buses running on this service are not wheelchair accessible.

In addition to at least ten Routemasters, buses on the free service are scheduled to include five RTs, one RTL, one RTW and Dennis Trident TA1 “London’s first wheelchair accessible double-decker”.

Please note, while every effort will be made to run to this timetable traffic conditions and un-serviceability of the vehicles may result in changes.

In 1992, the much longer route 159 was shortened. The northern section was renumbered  139. In addition to the buses on route 159, Metroline will also operate their Routemaster RML903 between Trafalgar Square and West Hampstead) on 9 December.  Click here for Route 139 timetable.

The Routemaster Association is organising a private road run over route 159 on Saturday 12 December 2015, also marking the anniversary.  The buses will not be in service on this day. Click here for more details