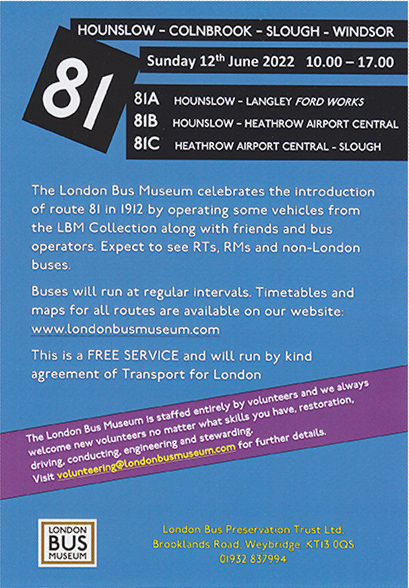 Introduction to the day and routes to be operated

Route 81 was one of the first fruits of the takeover of the London General Omnibus Company (LGOC) by the Underground Group in 1912, connecting the then western end of the District Line at Hounslow with Slough and Windsor. The route no longer served Windsor after 1963, but still today runs between Hounslow and Slough – 110 years of service to London.

Our free bus service, which operates in addition to the TfL service, will feature a range of bus types which have operated the 81 over the years (and a few that haven’t!). More modern preserved buses that do not comply with the London LEZ will operate between Colnbrook and Windsor only.  Several related routes will also be operated, as follows; for more details, see the Route 81 history.

The panel timetable (right) for Autofare-fitted Merlin buses on route 484 etc is from 1970.

Additional historic vehicles will run along the route but not in service. They will not display ‘route 81’.

London Bus Museum wishes to place on record its appreciation to all those vehicle owners who are taking part in this event. Further bus owners wishing to participate should contact us here.

Photographers are a welcome part of all our events – please stay safe and take particular care not to enter the restricted areas of bus stations.

Periodic revisions and additions are expected. Please check back regularly!

and ... RTs on route 37 Running Day (Putney Heath to Peckham) on 1st October 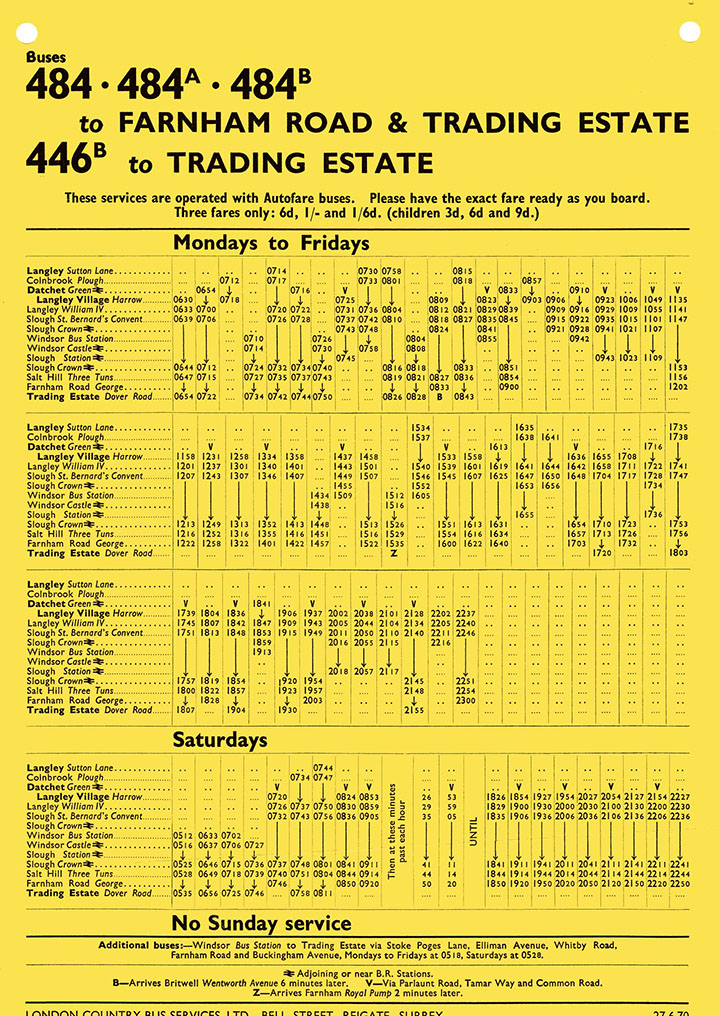 At the time, the London bus network did not extend further west than Isleworth (which had been reached by route 37 earlier in 1912).  Following the acquisition of the LGOC by the Underground Group, two new services commenced to connect the western end of the District Line with points further out (the other route was the 82 to Staines, later renumbered 117).

The First World War saw the 81 suspended, initially for February and March 1915 and then from July 1916 for the duration.  Recommenced as a Sunday route in April 1919 (buses being in short supply post-war), the daily service resumed in June 1920, by which time Hounslow garage (code AV) had opened.

Bus types progressed through the years, all still open top until covered-top NSs arrived in 1931.  These were followed by STs later that year, with STLs from 1939 to 1941 when the route was operated by Hanwell (Southall) garage.  Otherwise, the elderly STs remained in service until replaced by new RTs in 1948.

On a number of occasions between the wars, the route was extended in various ways, but retained its core Hounslow to Windsor service until 1939, when the section between Slough and Windsor was restricted to weekends only.  A variety of suffix letters was used in the 1920s and 1930s, until the numbering system was simplified in 1934.  Windsor continued to be served after the war, but only at weekends, up until October 1963.  From then until now, the 81 has operated between Hounslow and Slough; the growth of employment at Heathrow Airport has increased the route’s importance.

Route 81A (Hounslow – Langley) commenced in 1943 during the Second World War, to serve the Hawkers Factory which produced Hurricane fighters.  In true wartime style, the destination blinds read ‘Langley Sutton Lane’, a display which lasted unchanged though the change of factory (to become the Ford works that produced the Transit van) up to its last day of operation in August 1969.

After the last London trolleybuses were withdrawn on 8 May 1962, the 81B was extended on Sundays to operate from Shepherd’s Bush, replacing trolleybus 657; the Monday to Saturday service was covered by an extension of the 117.  From August 1969, the 117 replaced the 81B to Shepherd’s Bush on Sundays; the shortened 81B lasted only until September 1970, having been converted to one-person operation with SM class Swifts that April.  It was replaced and extended by new route 82 which continued from Heathrow Airport Central via the cargo tunnel to Hatton Cross and back to Hounslow West.

Also in August 1969, express route A1 was introduced with MBS class Merlins, running non-stop between Hounslow West Station (then the end of the Piccadilly Line) and Heathrow Airport Central.  The service ran until December 1979, when the Piccadilly Line finally reached Heathrow.

The last variant of the 81 was route 81C (London Airport Central – Slough) which had a short life, operating between January 1968 and April 1970.

The 81 group of routes operated RTs until Routemasters took over, progressively at weekends from 1962, on weekdays on the 81B from 1963, and with complete conversion in 1969.  Shortly afterwards, the route was converted to single-deck one person operation with SM, later SMS, class Swifts, followed by Leyland Nationals.

The 81 was the first route in London to be run by an independent operator, following the introduction of route tendering.  The operator was London Buslines, a division of Len Wright Travel, which commenced operation on 13 July 1985 with ex-London Transport DMS-class Daimler Fleetlines painted yellow and brown; these were later replaced with new buses.

In 1995, the tender was won by a subsidiary of West Midlands Travel, trading as Westlink; this company was acquired later that year by London United (a privatised division of London Buses), which was in turn acquired by French company Transdev in 1997.  In 2000, operation returned to London United’s Hounslow garage.  Ownership of London United moved in 2011 to the French state in the form of RATP.

Having been operated from Hounslow garage for the bulk of its history, the contract was won on re-tender in 2019 by Metroline, and now operates from their Lampton garage using elderly Volvo Wright Gemini 2s. 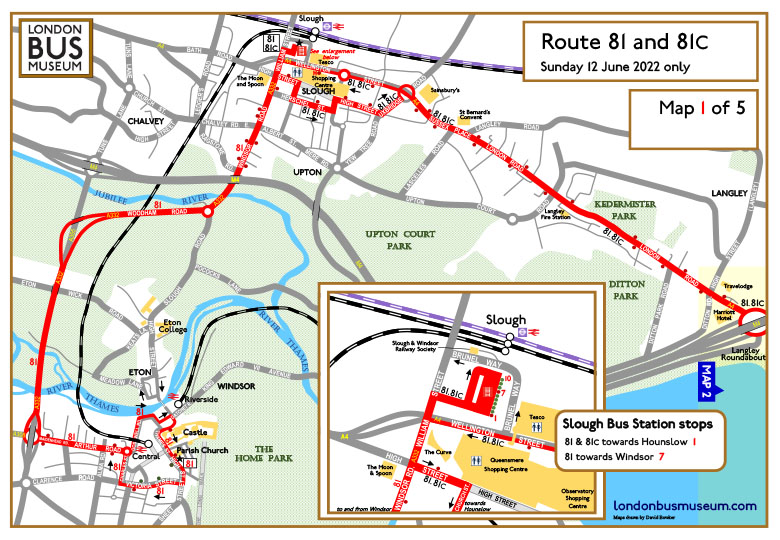 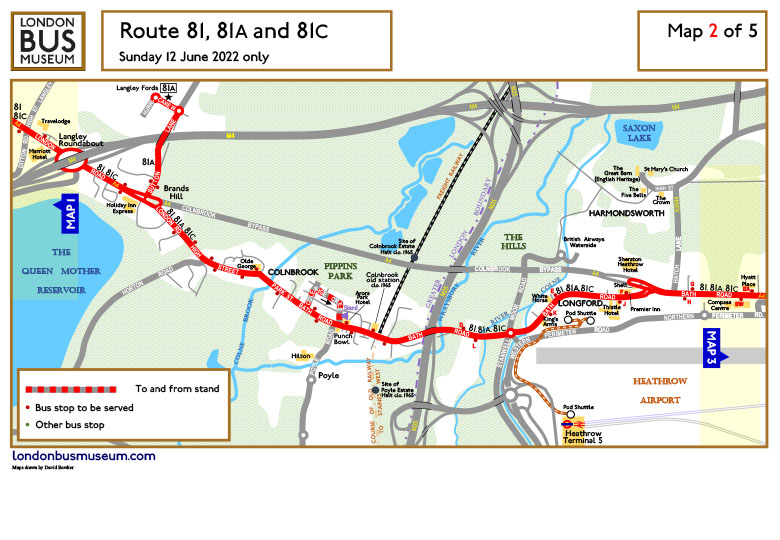 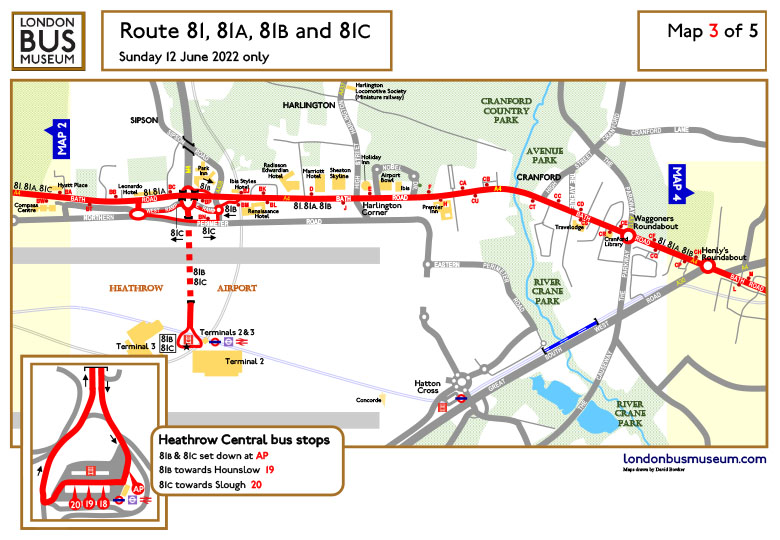 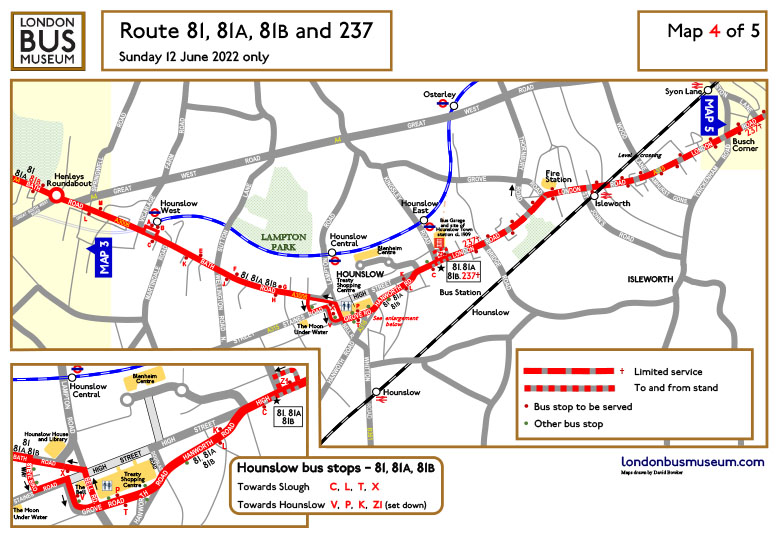 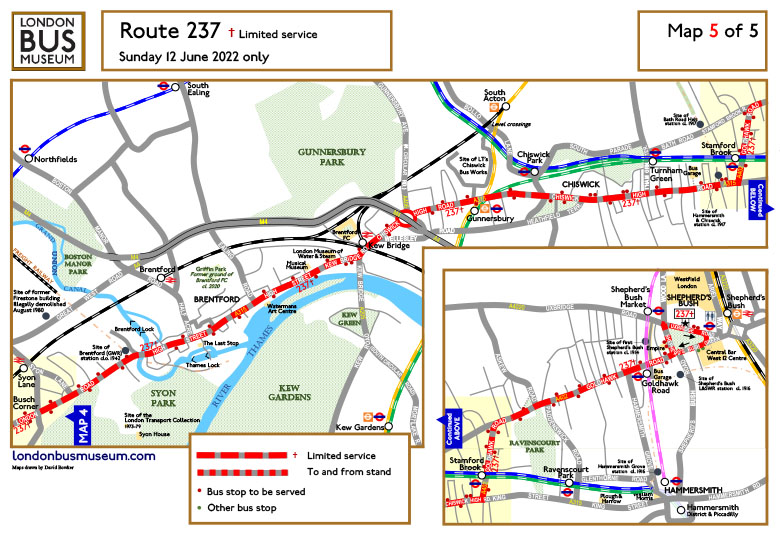 Your ticket for: Route 81 Running Day