Route 37 (Putney Station to Peckham; with feeder journeys from and to Hounslow)

Bus owners wishing to participate should contact us here. 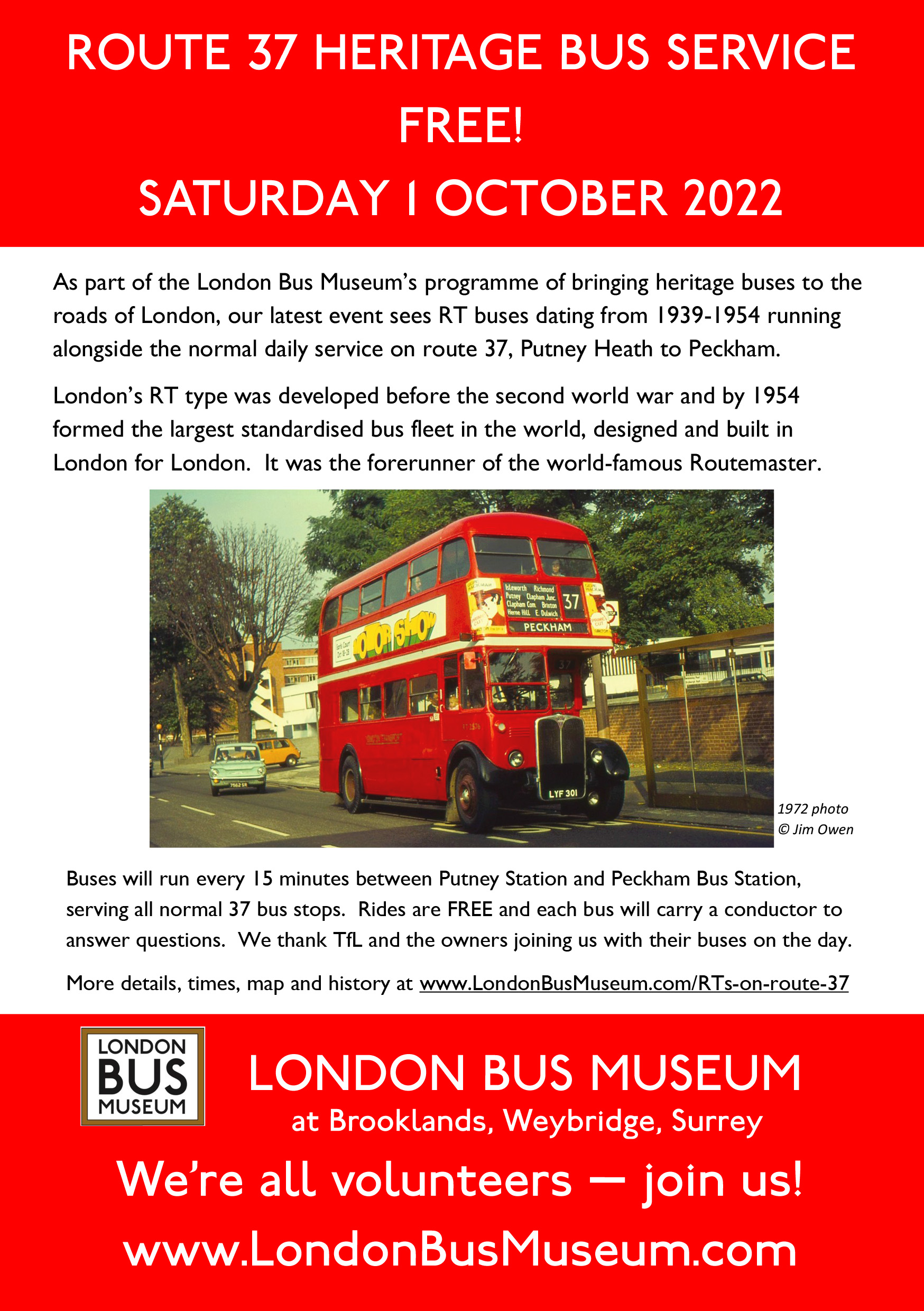 A history of bus route 37

The London General Omnibus Company in 1912 was approaching completion of the replacement of horse buses with motor buses.  New B-type buses were being built in large numbers and the bus route network expanded rapidly.  An unusual new route from March that year was the 37 from Herne Hill to Isleworth, unusual because it was an orbital route not running into central London.

To accommodate all the new routes, a dozen new garages were opened in 1912, including Twickenham (with the first two-letter code, AB), which ran the 37 in addition to the existing 27.  But the route’s first ten years saw a series of changes.  Intermittently extended to Hounslow during 1912-19, that section became permanent only with the introduction of route 37A in 1920.   Meanwhile, the eastern end of the route was extended beyond Herne Hill to Peckham in June 1914, with operator Thomas Tilling, who had a working agreement with LGOC, running half the buses on the route from November that year.  LGOC took back operation in April 1916, only to pass it to National Steam Car Co that August.

National Steam Car withdrew from London operation in November 1919 and handed its operations (including the 37) to LGOC.  The company was renamed National Omnibus and Transport Co and went on to run LGOC’s northern country area operations until 1932 and, under partial railway ownership, to spawn the Western, Southern and Eastern National companies.

On reversion to the LGOC, three garages shared the operation between Isleworth and Peckham – Twickenham, Putney and Old Kent Road – but the garages involved with the route were many and varied until operation settled at Putney in 1924.  Meanwhile, the 37A was introduced between Peckham Rye and Hounslow in January 1920, taking over Twickenham’s involvement from the 37.  Both routes were extended at their eastern end to Nunhead, the garage taken over from National Steam Car, between 1920 and 1922.  It was the 37A that, for the summer of 1921 only, was extended from Hounslow to Maidenhead – some 35 miles from Peckham Rye, still using solid-tyred B-types limited to 12mph.

From 1923/24 the B-types were replaced by the larger K-types, still on solid tyres.  From 1924, the route operated from Peckham to Isleworth (as 37A) and Hounslow Heath (as 37).  The K-types gave way gradually to larger S-types and the lower NS-types from 1927, with modern buses in the form of LT six-wheelers appearing from 1930 from Nunhead garage.  These continued to run alongside the S-types (until late 1931) and NSs (until late 1936, although by then these had pneumatic tyres and covered tops), with STLs replacing the NSs from December 1936.  The distinction between the 37 and 37A disappeared with the abandonment of the ‘Bassom’ numbering system in 1934.

For the 50 year period from the end of 1936 to 1986, the route saw operation by all the standard bus types of the period.  After the last of the NSs, there were LTs (from AH and M, until 1949), STs (from AV) and STLs (from AF, AB, AL and Q).  Putney introduced 2RT2s from 1940 and the LTs were replaced by post-war RTs at AH and M.  RTLs were introduced from AF and CA in 1955 and dominated operation until conversion to Routemasters commenced in 1962.  RTLs clung on to part of the Saturday operation from SW, briefly converting to RTs in 1967 when SW lost its RTLs.  RMs had themselves been replaced by RMLs in the majority of the allocation from 1966.

In the run-up to one person operation from June 1986, crew-operated Metrobuses were progressively introduced, taking over on conversion and accompanied by a handful of D-class Fleetlines from SW.  The final closure of CA in 1987 saw the allocation move to SW, from which time Ds and Ms shared the route.  SW converted partially to Metrobuses from 1990, but the major change was the shortening of the route in May 1991 to run from Putney Station to Peckham,.  The western part of the route was replaced by new routes 337 (Clapham Junction to Richmond) and H37 (Richmond to Hounslow).

The new tendered contract for the shortened 37 was won by London General, using Ms from SW.  In 1998, part of the operation was moved to NX, using T-class Titans, but when London General won a renewed contract in 1999, operation reverted to SW alone.  The Ms were replaced by low-floor PVLs in 2000, and a small allocation from AF ran alongside for part of 2001.  In March 2004, night route N37 was absorbed into the 37, making it a 24-hour route.  Operation transferred to PM (a new garage which had replaced the 1951 building) and AVL-class ALX400s from October 2004.  PM continues to operate the route today, now with E-class Enviro400s plus two NRM-lookalike Volvo hybrids equipped for (but not using) opportunity charging and a few MHV-class Volvos. 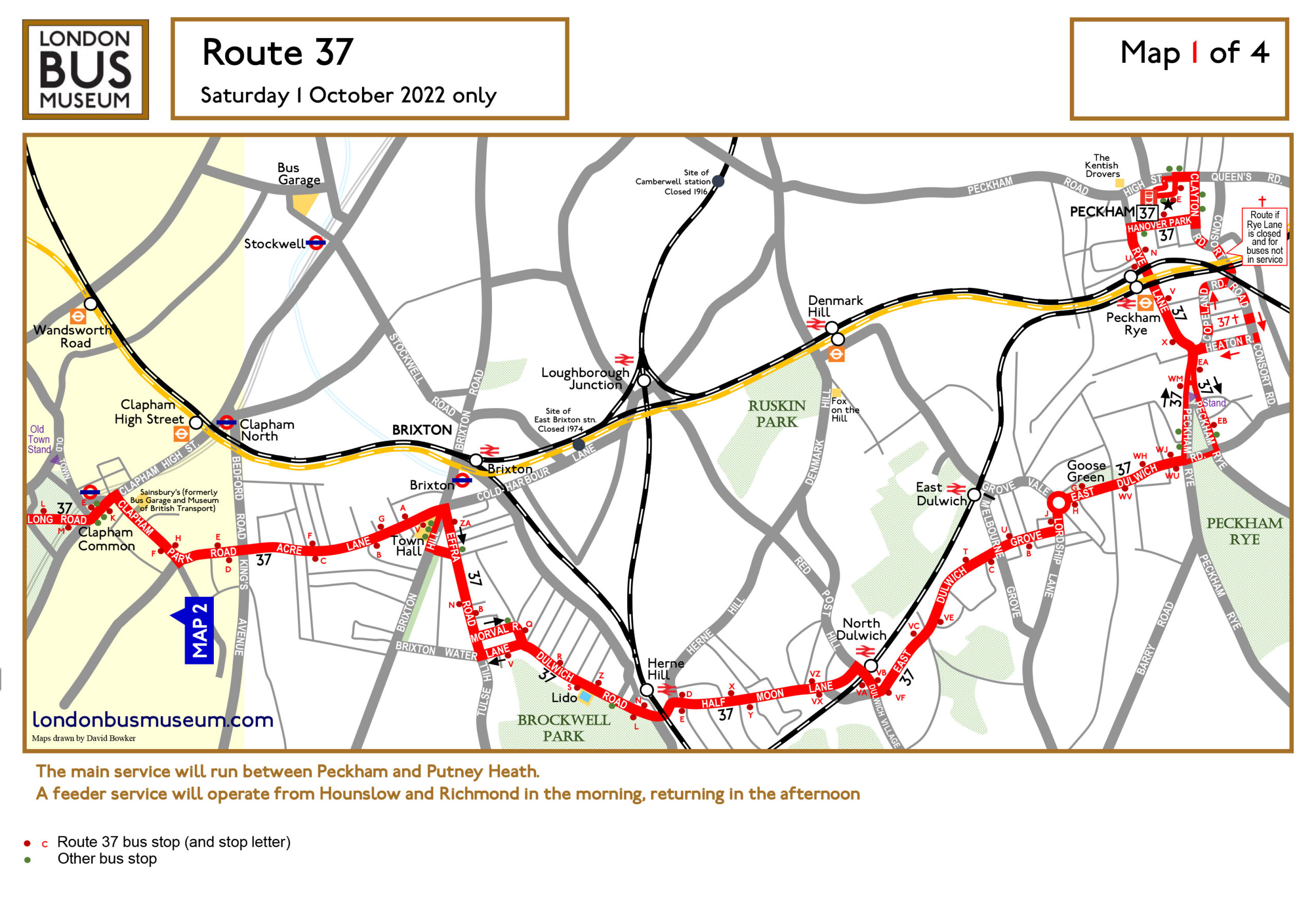 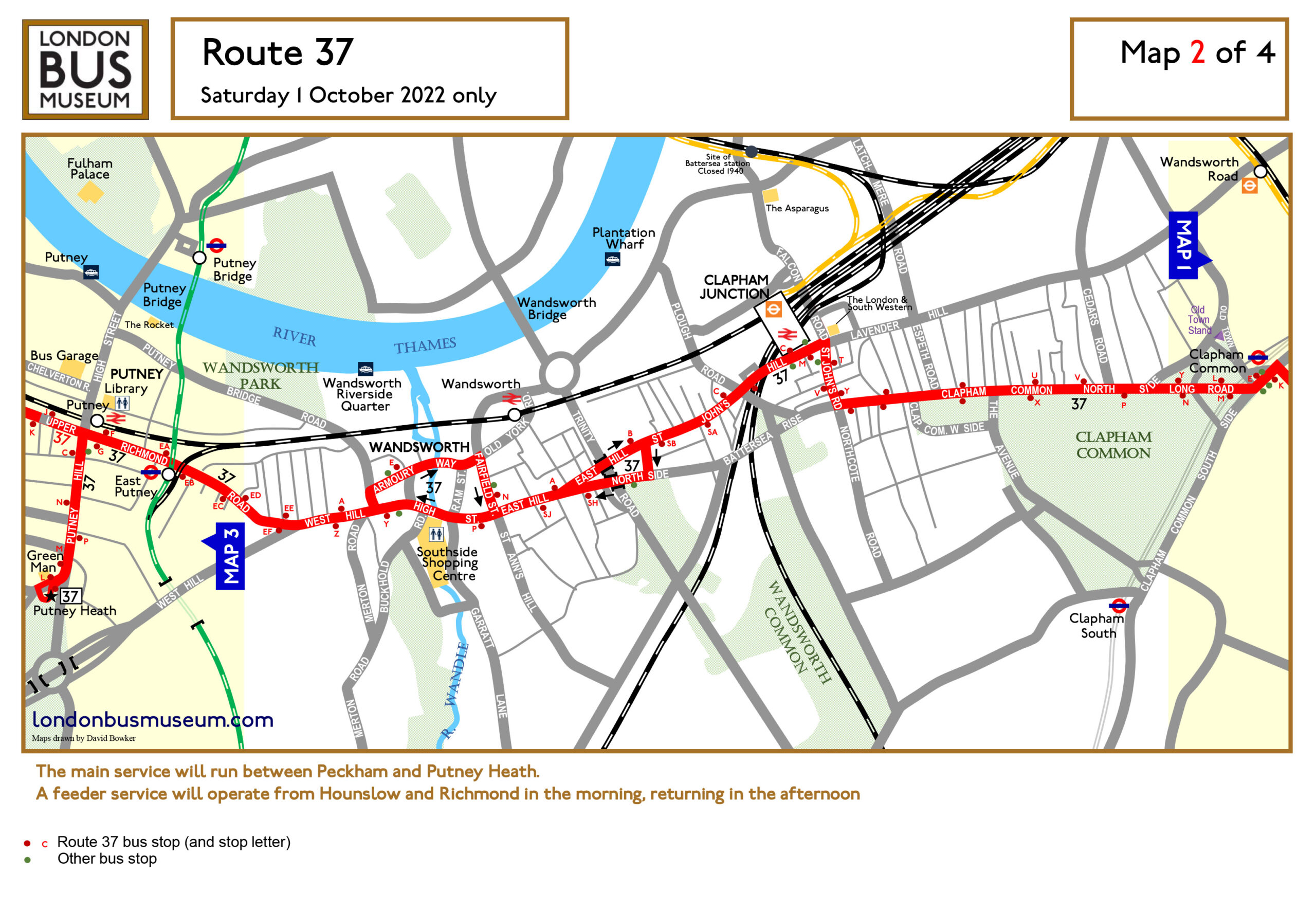 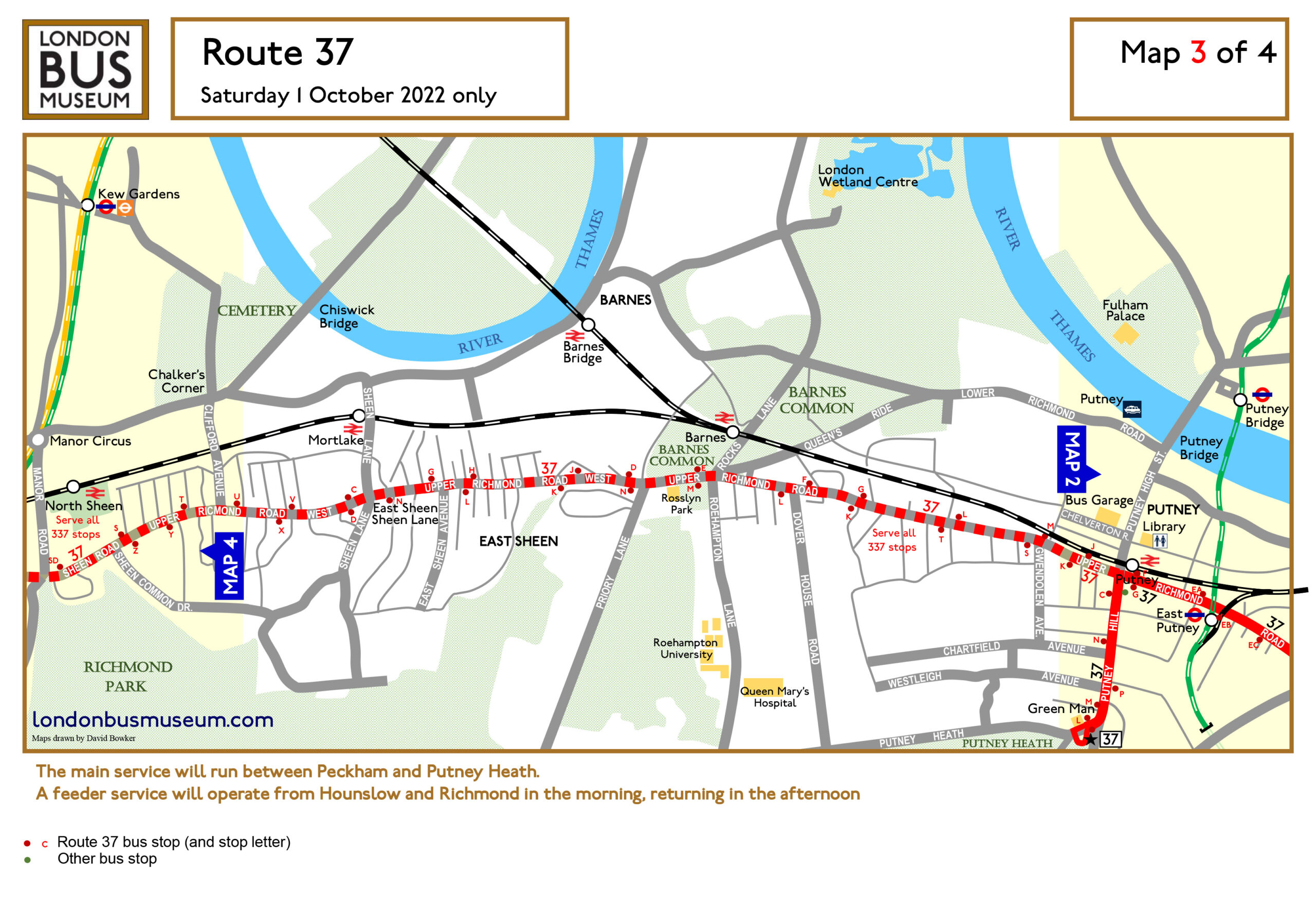 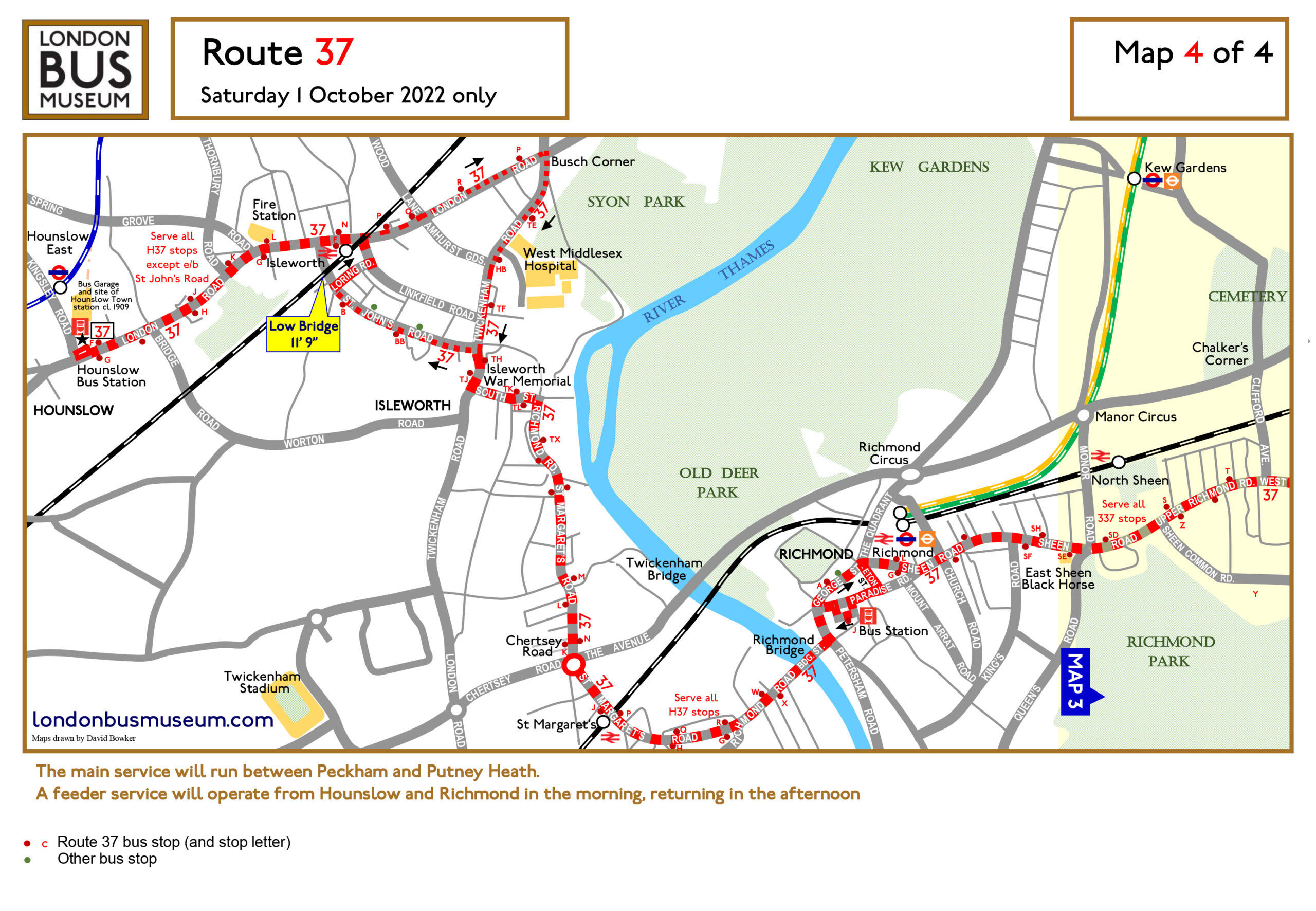