The Q model was an attempt by designers to maximise the area available for carrying passengers by moving the engine away from the front of the bus to a position on the side where it would not intrude into the saloon. The 4Q4 was a batch of 102 buses built for the Country Area. Q83 was new to Dorking garage and was one of 50 converted in 1937 for Greenline Coach use by the addition of luggage racks and heaters, working from Leatherhead and Watford, Leavesden Road garages. 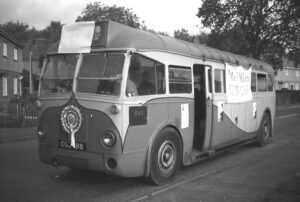 Shortly after acquisition for preservation, Q83 takes part in a procession for the Pathfinders Boys Club in October 1966. © Michael Wickham

With the introduction of new 10T10 coaches, it reverted to bus work from Guildford, then Windsor. From 1943 to 1949, the bus worked exclusively at St. Albans until transfer to South-Each working from Dunton Green and Northfleet. The final move was to Reigate in 1952 until withdrawal in May 1953. Disposal in January 1954 was to Sutton Coldfield Old People Welfare Association where it was converted to a ramp ambulance by the addition of a door and folding ramp in the back, toilet and washbasin, and the seats adapted to support stretchers. It was acquired for preservation in 1966, and arrived at Cobham soon after, being an early resident of the Museum. 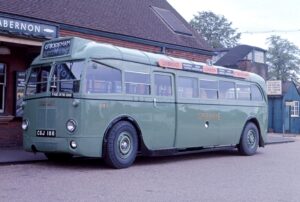 Although it was never painted red in service, a number of Museum volunteers repainted Q83 into central area red during 2002, as several other members of the 4Q4 class were painted red for a time while in service. The vehicle was donated to the Museum at the beginning of 2003, by Bill Cotterell, one of the founding members of Cobham Bus Museum.