This is the chassis of one of over 1100 K-types built for London in 1919-26. The pre-WW1 B-type had been a most successful and reliable bus, built in great numbers, but it suffered from a low capacity, just 34 seats, on account of its effectively being a horse-bus body mounted on a motorised chassis. The very reliability of the B-type led to a great increase in travel demand, so a way had to be found to increase vehicle capacities. 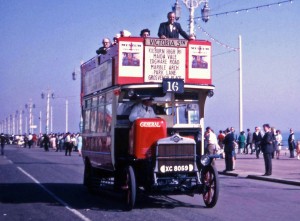 A preserved K-type on the Brighton Run in 1966. © Michael Wickham

The K-type, originally designed in 1911 but held up by the War, changed all that and represented a key stage in the evolution of the London bus. For the first time, the driver sat alongside the engine and this enabled the saloon to be extended forward, increasing the capacity to 46. Widening the lower sides of the body also enabled the downstairs passengers to sit facing forwards for the first time, a pattern that has prevailed ever since. A new, more powerful, engine and an improved clutch gave passengers a smoother ride.

The K-types, also built in single-decker form, were constructed quickly and in large numbers during 1920-21 so that the tremendous post-WW1 thirst for travel, caused by social emancipation and the growing middle classes, could be satisfied. The type served on London streets until 1932 after which many were sold, usually their bodies only, for use as chicken-houses and garden sheds etc. There are 2 complete K-type survivors, one of which, like the Museum’s chassis, was discovered after a long after-life of alternative use.

It is believed that this chassis was originally under the bus numbered K767 but further details are yet to be traced. It was discovered in 2011 in a field in Herefordshire with the remains of a completely un-matched LS-type body on top of it! (Parts of that derelict body have been saved and may be useful in the rebuilding of the Museum’s NS-type.) The original owner had purchased body and chassis in 1933 for use as a summerhouse and his grandson donated the chassis to the Museum. 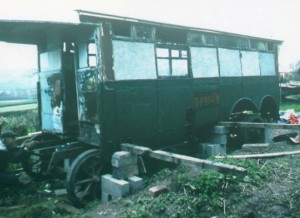 The chassis as discovered, under the remains of an un-matched body.

The chassis was brought back to the Museum and has been cleaned up for display. It is unlikely that a body will ever be found to enable a full restoration (unless one still lies in a field somewhere after all these years) but the chassis, with its main members consisting of a wooden flitch ‘sandwiched’ between metal plates, provides an interesting example of the basis of an early London motor-bus.

Your ticket for: K-type chassis