The Metrobus, built by Metro-Cammell-Weymann (MCW), was one of two types wich comprised the standard London double-decker of the 1980s, the other being the Leyland Titan (see the Museum’s Titan – T23). Following a collaboration with Scania in the mid-1970s which had produced the partially successful ‘Metropolitan’ bus, MCW decided to go it alone and produce a new type of integral double-decker, intended to break the monopoly of Leyland and launched in 1978 as the ‘Metrobus’.

London Transport (LT) had contributed a great deal to the design of Leyland’s Titan but was nonetheless reluctant to ‘put all its eggs into one basket’. It had borrowed a Metrobus demonstrator for evaluation at the end of 1977 but such were the pressures on spending that LT had to accept the risks of ‘teething troubles’ and effectively test the new design whilst in service. In February 1978, therefore, LT therefore ordered a large batch of Metrobuses. The first five were intended for ‘pre-production’ evaluation and these started to enter trial service in November that year. The first production bus – our M6 – had already arrived in September and, by March 1979, sufficient Metrobuses were available to convert two routes to the new buses.

A total of 1440 Mark I Metrobuses was purchased by LT between 1978 and 1986 and, following the premature cessation of Titan production and the run-down of the Routemaster fleet, the Metrobus became in 1987 London’s largest class of bus. Despite some problems with floor corrosion, the Metrobus was a popular and reliable workhorse. Large-scale withdrawal of the rival Titans began well before that of the Metrobuses and the newly-privatised London bus companies of the mid-1990s still saw these vehicles as highly-valued, dependable buses. Withdrawal of the Ms finally gathered pace in 1998 but it was to be 2004 before the last examples came out of front-line London service, eventually killed off by the requirement for low-floor buses. One route, the 240, had been continuously operated by Metrobuses for over 22 years! 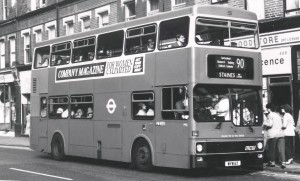 M6 picks up passengers in Twickenham in June 1981. © Gerald Mead

M6 was the first production Metrobus for London Transport and was delivered in September 1978, entering service at Fulwell garage in west London in March 1979 on routes 110 & 270. The picture at the top of the page shows the bus when it first entered service. One of the features of this and the other very early Metrobuses was the provision of an Automatic Fare Collection (AFC) machine with a turnstile. Passengers could either pay the driver or use the self-service machine on the other side of a dividing rail. The AFC machines proved to be unsatisfactory and were soon removed, the resulting space being used to install additional seating for 4 persons.

By the time of privatisation of London buses in 1994, M6 was operating in south London and it consequently passed to the Cowie Group, moving to their Leaside private hire fleet in 1996. In 1997, the bus was noteworthy for its use to publicise the launch of the new Arriva corporate identity, being painted all-over white for this purpose with contra-vision windows and large corporate logos. After that unusual use, M6 became a driver-trainer in Enfield in north London before final withdrawal at the end of 1998 at which stage it had notched up some 20 years of London service.

The bus was sold into private preservation in 2001 and joined the Museum Collection in 2003. Since then, Museum volunteers have done considerable work to put the bus back to its original 1978 condition including the re-fitting of the AFC machine. The bus is fully operational and an active member of the working fleet.