The RT-type is, to many people, the classic London bus, even though the Routemaster has since claimed, perhaps, greater fame due to its being the last of the line. The RT could be described as the ‘father’ of the Routemaster, being its direct predecessor and a remarkable bus in its own right. With a total production run of nearly 7,000 (more than double the number of Routemasters), the RT family was on London streets from 1939 to 1979 and the type was London’s standard bus of the 1950s and 1960s.

The RT was developed before WW2 with the prototype appearing in 1939 (RT1 has survived and is one of the stars of the Museum’s collection). Designed jointly by London Transport and AEC, the RT – with its advanced, streamlined styling, bright interior, comfortable seating, smooth new diesel engine, air-brakes and pre-selector gearbox – set new standards for the bus industry as a whole and confirmed London’s place at the forefront of bus design. A further 150 RT buses were delivered in 1940/41 before the War put a stop to production. After the War, production resumed on a grand scale – AEC built nearly 4,700 more with a further 2,100 from Leyland. This was the largest fleet of standardised buses the world had ever seen and this record has not been broken since.

For anyone who went to work or school by bus in London, its suburbs and the surrounding countryside in the 1950s/60s and into the early 1970s, the chances are, you travelled on an RT.

Although in most respects a standard London RT, RT2775 is of particular significance in that it was one of 3 RT-family buses which were selected, when new, to represent Britain on a 12,000-mile tour of North America and, as a result, the bus, or the body at least, was one of very few that retained the same identity throughout its working life. Normally, every time a bus entered works for its overhaul, its identity was given to another leaving works at the same time, thus simplifying the licensing process for London Transport. However, those buses which had gone abroad, popularly known as the ‘GB-plate buses’, were generally not subject to identity exchanges, and the identity of RT2775 was retained by the same body/chassis combination until 1964, when it was given a 1948 chassis which had originally been under RT734 and which it retains today. Nonetheless, the body we see today is that of the original RT 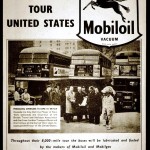 Mobiloil advertisement in ‘The Motor’ in June 1952. The picture is in New York and RT2775 is in the middle.

RT2775 was delivered to London Transport in January 1952 and was selected, with two others, to represent the British Travel and Holidays Association and London Transport on a tour of the USA and Canada to promote travel to Britain and the purchase of British products. The tour visited the cities of New York, Cincinatti, St Louis, Kansas City, Dallas, Sante Fe, Hollywood, San Francisco and returned via Salt Lake City, Denver, Omaha, Des Moines, Chicago and Detroit. The 2000-mile detour to Canada visited Ottawa, Montreal, Perth, Toronto and London, Ontario. 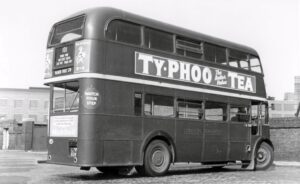 On return to Britain the vehicles were put on show at the 1952 Commercial Motor Show at Earls Court in recognition of their faultless performance. After return to the coachmakers to be put in service condition, RT2775 was allocated to Mortlake garage in December 1952, and finally entered normal revenue earning service. In May 1953, it was moved to Old Kent Road for the Coronation special bus service. Withdrawal in May 1977, it was one of the last of the RT type still in service and was acquired by Cobham Bus Museum in July 1977. 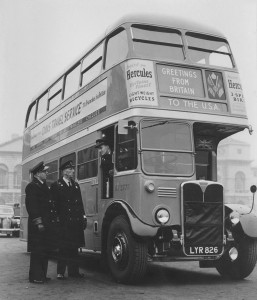 The vehicle was taken out of use during 1991, when it was found that the platform riser needed replacing, and has been the subject of a very thorough restoration, which has included replacing a large number of life-expired components and almost a full re-panel.

The restoration to the external condition in which the bus toured North America was completed in time for the 60th anniversary of the tour in 2012, when RT2775 was re-launched by London’s Transport Commissioner and Museum Vice President, Peter Hendy CBE, at the Museum’s Spring Gathering at Wisley, in the presence of Audrey Dennis, widow of Albert Dennis, one of the Tour drivers and members of the family of George Gwynn, another of the drivers.

Here are some items of interest regarding the 1952 North American Tour:

A postcard available from the bus on the US part of the Tour.

A leaflet about London Transport given out on the US Tour.

Read a brief history of The RT family