150 years of Bus History under one roof

The London Bus Museum houses the world's largest collection of historic London buses, covering 150 years of development - from the horse-drawn bus of the 1870s to the driver-operated, battery-electric bus of the 21st century.  Our buses fall into 3 categories:

By clicking on the headings on the left, you can open up details of each individual vehicle and other major artefacts.

Many of our buses on display in the Museum.   Although on display, most of these buses are in working order and also appear on the road from time to time. They are much in demand for film and TV work.

Our volunteers will be pleased to answer any questions you have about the buses and their background history. PLEASE do not board them without permission from our staff. For safety reasons we request visitors with children to keep them under supervision

Step back in time in our diorama of Mansion House in 1900...follow George Shillibeer’s first London horse bus service in 1829 into the “knifeboard” and “garden seat” designs and early experimentation with steam, through 85 years of development. Finally, late in the 19th century, the need to carry London’s increasing numbers of passengers faster, farther and more efficiently, spawned a variety of ingenious mechanical buses, steam, electric, a combination of petrol and electric - and petrol, which swept the last of the horse buses from London streets by 1914.

After the Great War, social changes and London’s expanding suburbs led to a huge increase in public travel, so hard-pressed operators sought larger buses to carry more passengers. “Roaring 20s” London was a wonderland of buses of all shapes and and types in the brightly coloured liveries of a vast number of bus companies, including the independent operators, the so-called "pirates". By the end of the 1920s, buses had covered top-decks, softer-ride, pneumatic balloon tyres for improved passenger comfort and drivers' cabs now had a windscreen against the weather.

The Decade of Development: the 1930s

In the 1930s, the pace of development increased dramatically and the London bus began to look like those we all still recognise today. A 1933 Act of Parliament compulsorily purchased all London’s bus companies to form the world’s biggest public transport undertaking, the London Transport Passenger Board ("London Transport"). There followed great leaps forward in the modern motor bus: diesel engines replaced petrol and semi-automatic transmission (preselector gearboxes with fluid flywheels) and power brakes all appeared in the early 1930s together with a pleasing elegance of design and improved passenger comfort. The shape of things to come is indicated by our AEC “Q” type revolutionary single decker with underfloor engine amidships and semiautomatic transmission, 20 years ahead of its time.

RT: The Bus designed for London

When London Transport took over in 1933, it found itself with a headache - trying to service and repair hundreds of different types and makes of inherited buses and coaches. It decided that, as soon as it could, it would replace them all with just a few types of specially-designed buses built for the rigours of working in London's tough traffic conditions. In a final pre-war triumph, on 9th August 1939, just three weeks before the outbreak of World War 2, LT’s famous Chiswick Works unveiled its first advanced, state-of the art, standardised double-decker bus designed and specially built for London. But war-clouds were gathering over Europe and only 150 of the new buses could be built before WW2 called a halt and it would be nine long years before the aim of standardising on the new type of bus was accomplished.

During 1940/1941 the Luftwaffe’s bombing of London wrought devastation, killing and injuring thousands and destroying hundreds of buses. It led to a desperate shortage of transport for Londoners, who somehow, just carried on. Initially, the government did not permit the construction of new buses - the war effort came first - and buses had to be borrowed from the provinces. Later, the government was forced to relent and allow a limited production of buses to re-commence. Known as ‘Utility Buses’, these were built to strict austerity standards, using any available wood and metal left over from the war effort but these buses helped to replace those destroyed by air raids. Crude but functional, with wood slatted seats, angular lines, and a single skin, these Guys, Daimlers and Bristols were quite alien to London but they played a vital role in keeping war-time London moving. Our G351 Guy Arab Mk1 (1945) is the sole survivor of this fleet of 800 war-time “utility” buses.

After the 2nd World War Britain entered a grim period of, if anything, worse austerity as the desperate shortage of money and raw materials bit hard. London Transport’s worn out, ageing bus fleet, battered by enemy action and made worse by minimum maintenance had soldiered on years past its withdrawal date. Finally, in a situation of desperate need, the British Transport Commission allowed LT have a limited supply of new buses, mostly of provincial designs such as our Leyland single-deck TD95. These were not up to LT’s sophisticated specifications,but they bridged the gap until the new RT-family of advanced, standardised buses began to arrive in 1947.

After 1947, the trickle of the new RT-family standardised double-deckers became a flood and, by the mid 1950s, almost 7,000 of them had swept away all the worn out, pre-war time fleet as well as the "utilities" and London's last trams. Bus services expanded rapidly to serve London’s country as new towns such as Crawley and Stevenage were built. The first of a handsome new, standardised single-decker, the RF type, appeared as sightseeing coaches just in time for the Festival of Britain in 1951 and then took over nearly all London's single-deck services as Green Line coaches and red, as well as green, country buses. Almost the only exceptions to London's now standardised bus fleet were the small batches of low-height buses for routes under low bridges and the little single-deckers for country-lane services.

Originally opened in 1921 by the London General Omnibus Company when it grew out of its works in Walthamstow, the famous Chiswick Works in west London was the crucible of design for developing and building London’s buses for over 35 years. London Transport’s other major plant was a purpose-built factory called Aldenham Bus Overhaul Works. Opened in 1956, it was designed specially for the purpose of overhauling the RT-family standardised doubledeckers, and later, the Routemaster fleet. It could overhaul 50 buses a week, using state-of-the-art production line techniques, previously unknown anywhere in the world. The huge original works signs from these buildings were rescued, and are on display at the Museum.

Routemaster - the last bus made for London

The Routemaster bus was developed as a replacement for London’s wornout electric trolley-bus system. Although not unlike a standard RT bus of the previous generation, with the driver in a half-cab alongside the engine and open rear platform for the conductor, it is in fact a technological marvel under its skin. During WW2, London Transport’s works built Halifax bomber aeroplanes, jig-building them with advanced aluminium processes. In the post war years, they adapted these skills to design a new lightweight double decker bus for the future. First appearing at the London Commercial Motor Show in 1954, it was named the “Routemaster”, the familiar red bus that has become a national icon, loved the world over. 2760 were built in several forms using standardised module construction - as central buses, Greenline coaches, country buses, airbuses - and finally a stretched version. Sadly, a rear-engined front entrance Routemaster prototype, using same standard kit of parts, was stopped when British Leyland took over.

By the mid-1960s London Transport had to the solve twin problems of reducing costs and difficulty of recruiting staff. It decided to introduce “oneman-operated” buses. But its standard RMs and RTs had a crew of two, a driver, and a conductor who collected passengers’ fares. This meant almost its whole fleet of double-deckers were not suitable for one person operation. A new bus had to be found quickly to enable the driver to take fares and oversee passengers by himself. A completely different bus layout was needed and M6 is an example of several different types of buses of the late 1970s built on this principle. Compare it with earlier buses to see how it differs.

We are a working bus museum and most of our vehicles have been restored to, and are maintained in, working order. Not on show within the timeline display is a small selection of buses used as a “handling” fleet which comes out onto the road and, on occasions such as our special events and running days, provides rides. These buses are housed in our adjacent Restoration & Maintenance Workshop and, although not on display, can sometimes be glimpsed when the workshop doors are open in fine weather. On occasions, and when it is safe to do so, an escorted tour of the workshop may be arranged upon request to one of our stewards but we ask for your understanding that this may not be possible on the occasion of your visit.

The Museum has a fully equipped, modern workshop in which our skilled volunteers maintain our working fleet as well as carry out those award-winning restorations for which the Museum has become renowned. Most of the restorations involve a complete re-build from a wreck that has been discovered in a field or barn somewhere and a number of the buses on display in the Hall have been through this process. A restoration not only requires the incredible skills of those who refurbish irreplaceable parts as well as craft new ones but also the hard work of the researchers who delve deep into ancient records to ensure that colours and other details are painstakingly accurate.

As with the Handling Fleet, it may be possible on occasions to view our current restoration work by making a request to one of our stewards. 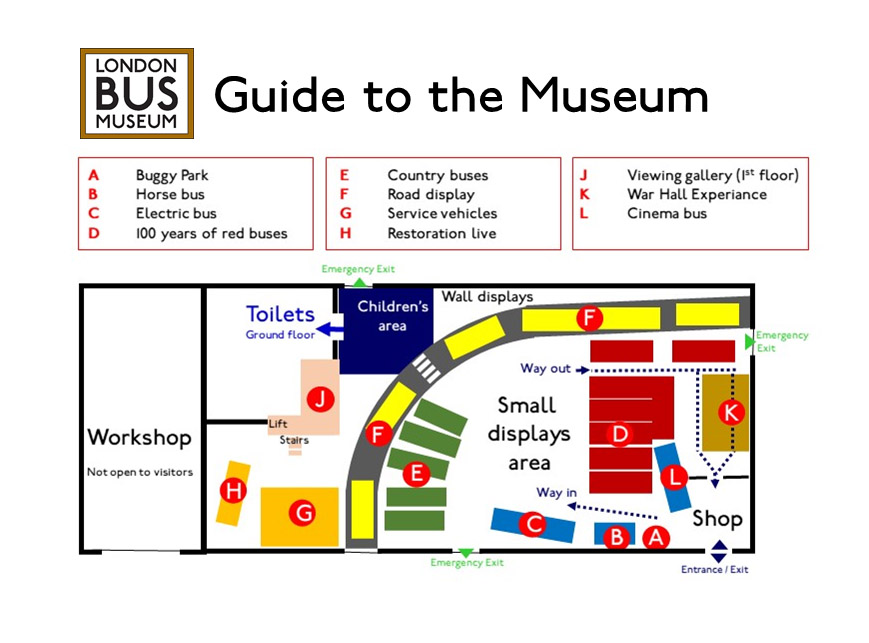 Your ticket for: Museum Exhibits