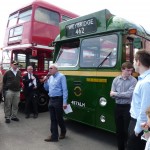 The very last Routemaster, a long-gone RT-type back from Paris and a significant country single-decker have joined LBM’s Collection. All three were unveiled at the Spring Gathering on 21 April by our Vice President, Leon Daniels, Transport for London’s Managing Director of Surface Transport.

1968-built RML2760 was the very last Routemaster to be delivered. After retirement from normal service in 2004, Stagecoach London kept in for special purposes. It remained largely in its original 1968 condition. The company has now placed it on long-term loan to the Museum where, as a fully-licensed PCV, it will be an active member of our working fleet.

RT2657 is an early post-war member of London’s huge RT-family fleet – London’s standard bus of the 1950s/60s – and carries the once well-known ‘roofbox’ for the display of the route number. Delivered in 1948, it left London service in 1964 and was sold to the Paris Transport Museum where it resided for the next 49 years. That museum have kindly donated it to LBM and its repatriation followed in February this year. It is planned eventually to return the bus to full passenger-carrying condition.

RW3 is one of three AEC Reliances ordered by London Transport in 1960 to, firstly, consider what might be suitable for replacement of the single-deck fleet and, even more importantly, to test the concept of a two-door system with centre exit – a feature which subsequently became standard on London buses to this day. The RWs were used by LT for 3 years before disposal to another operator. RW3 was saved for preservation and has been extensively restored by its private owners who have placed it on long-term loan to the Museum where it will be displayed as part of the London bus story.

These three buses will be given their own pages in the Exhibits area of the website shortly.

Your ticket for: Three great buses join the Collection