the 5th generation family owned company, who not only have reach their 90th anniversary but also ran a successful charity open day in Guildford on 29th March (2014) 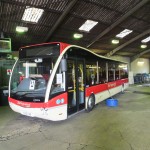 Your ticket for: Safeguard 90th Anniversary