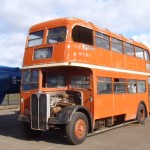 RLH53 at Liverpool Docks on 10 April 2012 after unloading from the ship.

After months of hassle with US bureaucracy, the three RLHs have finally been repatriated. They arrived safely today (10 April) at Liverpool on board the Atlantic Conveyer. 53 will be low-loaded down to the Museum’s storage depot next Monday. A huge credit to Chairman Peter Duplock who has wrestled with all the obstacles thrown in our path and persevered in the face of them. And thanks again to those Members who donated to the appeal – your good faith has been rewarded!

A further report will follow next week. It is hoped to display RLH53 at the Museum for a period in “as found” condition.

Your ticket for: RLH53 is back in the UK!