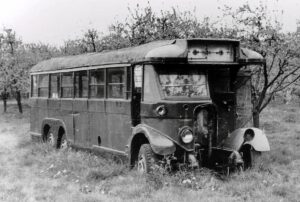 LT1059 in retirement in the country. Photographer unknown

LT1059 was delivered new to Dalston garage in 1931. It was re-seated to periphery seating (B33F + 20) at the end of 1941, to allow more passengers could be carried during the war. Withdrawn towards the end of 1949, from Sutton garage, it passed to the dealer, Daniels of Rainham, and it then subsequently went to a garden in Teignmouth, Devon as overflow accommodation behind a guest house, where it remained screened by trees. 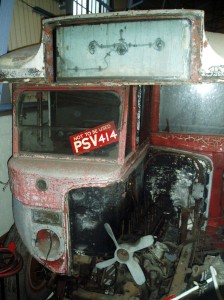 When LT1059 was finally extracted from the garden, under its own power, it was stored for a time during the 1970s, at the museum. It was owned by Mr P Marshall, who later sold it to a group in Purley, South London. The bus was again sold in the late 1980s to a preservationist in Kent, who had also acquired LT1076. Both were sold at auction in 1994, with LT1059 being bought by two Cobham members, who eventually donated it to the Museum in 2003. The vehicle is effectively derelict, and will require a full restoration, when time and money permit.