Our Shop is OPEN for ONLINE ORDERS but the Museum is CLOSED for a Refresh, reopening again when Brooklands Museum re-opens ... see Latest News 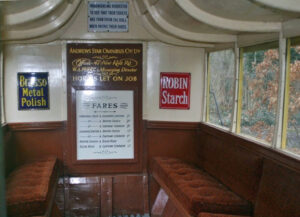 Inside the Knifeboard Horse-bus. © Michael Wickham

This is the oldest bus in the Museum, over 100 years older than the newest! The vehicle was built by the London General Omnibus Company for use in central London, but in early motorbus days was sold to Andrews’ Star Ominibus Company for use on the Clapham to Brixton route. The Star Omnibus Co. Ltd. was formed in 1899, taking over the business of the Andrews’ Star Omnibus Co. Ltd formed in 1892 by Solomon Andrews and his son Francis. This enabled their existing business, Solomon Andrews and Son, to trade in London. The company operated fifteen routes at a fixed fare of 1d. The company suffered financially from the competition and went into liquidation in 1909 after the death of Solomon Andrews.

After that, the bus found its way into the ownership of Mills Circus, who used it for a number of years before passing it on to Chessington Zoo. It was then operated on a service between Chessington South Station and the Zoo. It was retired in 1949 when it failed to pass an inspection. 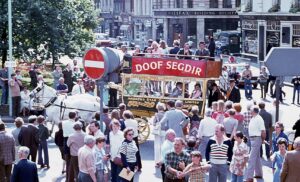 In 1979, the 'Knifeboard' was back on the streets of London for the 'Omnibus 150' celebrations. © Mike Beamish

It was acquired by John Andrews in 1963, whose family is the “Andrews” in the Andrews’ Star Omnibus Company, the original owners. It was overhauled and took part in the Shillibeer 150th anniversary in 1979 – George Shillibeer had introduced the horse bus into London in 1829.

This bus was donated to the Museum by the John Andrews Charitable Trust in 2007.

Your ticket for the: c1875 “Knifeboard” Horse-Bus