Probably built by S. Andrews & Son, at Cardiff, for their Star Company, as one of their Patent Buses. These were constructed with the springs outside the wheels so that they could have the same “track” width as the local tram-lines.

After service with the Star Company, this bus passed to W.A. Perry & Priest, who probably used it until August 1914, when it is likely that their horses were requisitioned for army service.

In the 1930s this bus was owned by Job Master Robert Barley. After that, it is believed to have been used by Dolland & Aitchison for a while. About 1948 it was acquired by Bernard Mills, from whom it passed to Tim Richards, of Gawsworth Hall. In 1979 it took part in the “Shillibeer” 150th anniversary – George Shillibeer had introduced the horse-bus into London in 1829. It was also used to operate a bus service to London Zoo around that time. 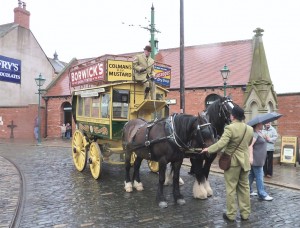 The 4-light horse-bus in service at Beamish Museum. © David Kinnear

In 1988 the bus was acquired by the Andrews family and returned to Cardiff, where it was originally built, receiving a very thorough overhaul and repaint into Andrews Star Omnibus Co livery. It was donated to the Museum by the John Andrews Charitable Trust in 2007 and was on loan to The North of England Open Air Museum, at Beamish, returning to London in September 2013