long and, on occasions, very testing restoration, the AEC Regal IV prototype, UMP 227, has finally been completed and will be unveiled at Transportfest 2013.

As this bus was a development vehicle, many changes took place during its lifetime and without original technical details being available, the team bringing UMP back to life, were presented with a formidable task.

However, due to their professionalism and unquestionable engineering skills, th

e Regal has been returned, as close as possible, to the condition it would have been in, when first out shopped from the AEC factory in Southall, to become the fore runner of the successful London Transport RF class of single decker.

A Regent With a Difference 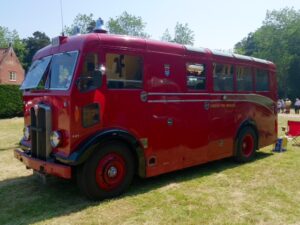 Whilst AEC Regents are usually associated with buses, they also formed the basis of appliances used by the London Fire Brigade and OXT 799 is in fact a1954 Maudesley Merryweather ‘A’ type emergency tender, which is based on a shortened Regent III chassis, whilst still using an AEC style radiator shell within the design.

The tender has a crash gearbox, with a 9.6 litre AEC diesel engine driving the road wheels and also providing power for the 8kv 110v generator used for lighting and powering tools at the scene of an incident.

The appliance initially entered service at London Fire Brigades headquarters, on the Embankment in Lambeth, then was transferred to a number of other stations before it was taken ‘off the run’ and went out of active service in 1976, being transferred to
the LFB museum fleet and then finally sold for preservation in 1983. 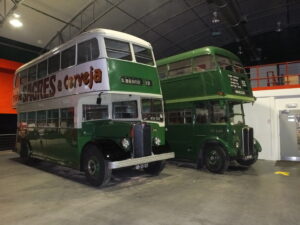 On display at Transportfest will be a unique rare survivor of many British made left-hand-drive double-deckers, an  AEC Regent III, exported in 1954 to Lisbon in Portugal and operated by the London owned, Companhia Carris de Ferrio de Lisboa, with fleet number 255.

AEC made a proper engineering adaption of their right hand drive Regent chassis and without this, access to parts such as injectors, fuel pump and controls would be restricted, with large investments being made to create additional castings for the left hand variant.

With chassis and mechanicals produced by AEC at Southall and a Weymann body built at Addlestone, Carris 255 represents an era when British manufacturing dominated many overseas markets, with this bus being operated in an environment, more arduous than anything at home.

Bought by current owner in April 1983 for preservation, Carris 255 was driven from Portugal though Spain, then by ferry to Plymouth, a remarkable journey by a dedicated group, to preserve a truly remarkable bus.

A Touch of Paris at Brooklands 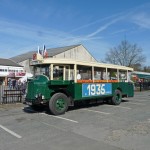 A 1935 Renault single deck bus, that operated in Paris for many years, will be on display and providing rides around the show ground during the day, sharing the duties with one of the London Bus Museum’s own preserved vehicles.

Here’s a great opportunity to compare the modes of transport that would have moved the populace of two equally famous Capitals.

Your ticket for: Looking Forward to Transportfest 2013, October 20th