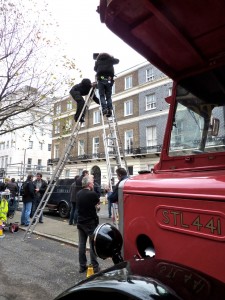 Filming “The King’s Speech” with our 1934 double-decker. © David Kinnear

London Bus Museum has the largest collection of historic, working London buses in the world and, in many cases, is the only source of authentic period props of this kind. We can supply a Victorian horse-bus, a 1920s open-topper, 1930s and WW2 buses, standard London buses and coaches of the 1950s as well as the famous Routemasters.

LBM staff  can work with the film company’s props department to help achieve authenticity and are available to crew our buses as costumed “extras”. Our Curatorial department can also provide producers and researchers with historical advice on vehicles, street scenes, uniforms and equipment from our  vast archives.

Museum buses have appeared in many films and TV shows, including the following films: 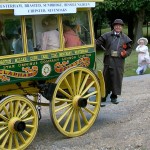 Museum staff can act as extras in appropriate period costume as here, on the set of “Unfounded Rumours”. © David Kinnear

and the following TV programmes:

The Museum’s buses are precious artefacts, in many cases unique survivors, and it is the Museum’s policy to allow them to be used but sparingly and only in cases where we can be satisfied that the subject matter of the film/programme is suitable and that the makers are of good reputation. The Museum will require to see evidence of adequate and appropriate insurance cover and it is a condition of making vehicles available for this work that Museum personnel are in attendance at all times and that no non-Museum personnel drive the vehicle or otherwise take control of it at any time. Only easily-removable, non-harmful notices or advertisements may be applied to our vehicles and only under strict supervision of our staff. 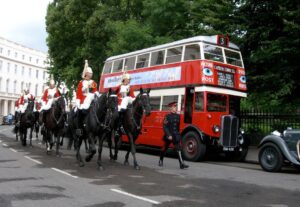 Fees for the hire of a bus are negotiable and apply on a sliding scale, depending on the age of the bus concerned. As guidance, motor-buses up to and including WW2 vintage will generally cost £1,000 a day, or part thereof, and post-war vehicles £500. The fee will vary according to the distance travelled to location and the fuel costs, particularly for the early, petrol-engined buses, may mean that those figures are exceeded. The hire of a horse-bus, complete with horses and tack, starts at £2,250 per day.

To enquire about hiring a Museum bus for film or TV work, please contact our Commercial Manager here.

Your ticket for: Props for Film & TV