A roofbox RT for the Museum? 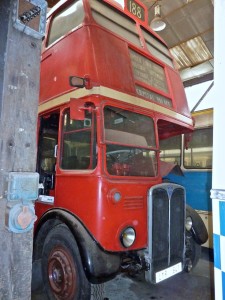 RT2657 is currently hemmed in by other vehicles. © David Kinnear

Chairman Peter Duplock, Curatorial Trustee David Kinnear and engineering team members Ian Barrett and Andy Baxter travelled to France last week to inspect RT2657, which has been in the care of the Paris Transport Museum (AMTUIR) since its donation by London Transport in 1965. AMTUIR now find themselves with a surplus of vehicles and, through the good offices of our Vice President Peter Hendy, London’s Transport Commissioner, they are prepared, in principle, to donate the bus to LBM.

RT2657 (RT3-type roofbox body no. 1956) was delivered as RT677 in 1948, undergoing a number of identity changes before leaving Aldenham with its current fleetnumber in 1959 and being withdrawn in 1964. The interior of the bus is in ‘as withdrawn’ condition although it has been repainted externally at some stage. Our engineering colleagues report that it is in very reasonable condition but extracting it will take some time as it is blocked by around 30 vehicles, including trams! 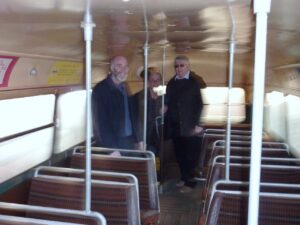 Looks like a job for our trimshop on those seats! Peter Duplock, Ian Barrett and Andy Baxter step into a 1964 timewarp on 2657's upper deck. © David Kinnear

Should we be successful in completing the acquisition of this early postwar RT (and we are optimistic in this regard), it will make a fine addition to the Collection and is expected evantually to form part of the Museum’s active, working fleet. We will keep Members advised of developments but don’t expect anything in the short term.

Your ticket for: A roofbox RT for the Museum?

A roofbox RT for the Museum?