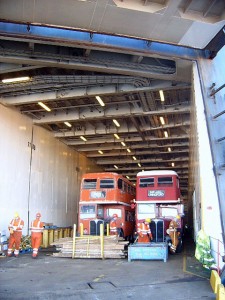 RLH53 and another blink in the bright Liverpool light as the doors of the ship are opened. © David Thrower

After months of overcoming obstacles, the Museum has finally succeeded in repatriating RLH53, a 1952 AEC Regent III with Weymann ‘lowbridge’ 56-seat body, from the USA, where it has resided for 40 of its 60 years. The bus, along with two others of its type, had latterly been owned, but never used, by a Californian tour-operator before being saved by a preservationist in Oregon in 2007. All three RLHs have been repatriated together in a joint operation with two other UK purchasers, one of whom sadly passed away before the buses completed their journeys home.

After their London service was over, most of the 76 RLH buses were either exported (to North America or continental Europe) or scrapped, so relatively few have survived in the UK. Low-height double-deckers were a small but important part of the London Transport fleet, so we are delighted to have been able to plug this gap in the Museum’s Collection.

RLH53 will be placed on display in the Museum for a while in its ‘as found’ condition and we will post further here as soon as it is available for viewing. The bus now has its own page on the website here where you can read more about it.

Your ticket for: 1952 Low-height AEC Regent III repatriated from the USA and joins the Museum Collection