The Trustees are delighted to announce that the Museum has acquired Leyland Titan T23 for the Collection. The bus is one of the early, Park Royal-bodied Titans, which gives it a special significance as this was the coachworks which also produced large numbers of the RTs and 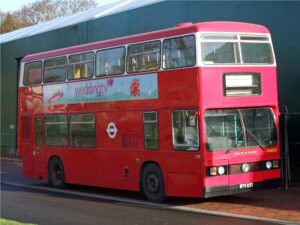 T23 at the Museum. (Photo by Kevin Hibbs)

nearly all the Routemasters. Although initially privately preserved upon withdrawal in 2001, T23 was later returned to service and currently retains a Class 6 (full PCV) ticket.

This acquisition means that the Museum now has representatives of both standard London Transport double-decker types of the 1980s – the Titan and the Metrobus. T23 carries its original 1979 livery with white surrounds to the upper-deck windows and will form part of the Museum’s ‘handling fleet’.